My Dog Has IBS 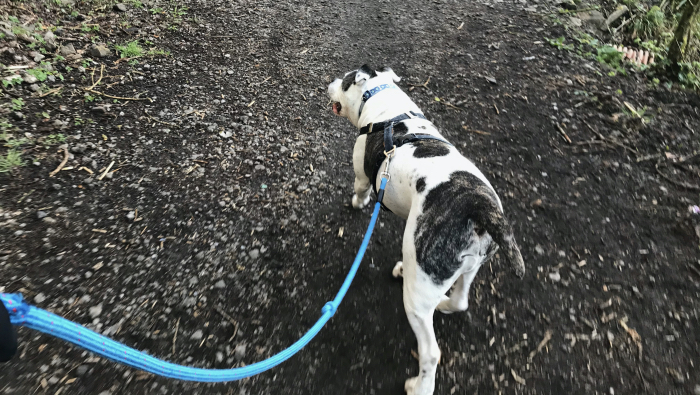 Yes you read that correctly, my dog has IBS.

It all started one Saturday afternoon in September 2017. I was clearing up after Winston and I noticed blood in his poop. I freaked out and called the emergency vet. They told me to bring him in immediately so I rushed him to the vets where they checked him over and took blood for tests. I’d told the vet that Winston had been having a gurgly tummy recently and was eating grass to settle it. Also that his flatulence now smelt like he was dead inside.

The vet said that Winston didn’t seem to be in pain, his heart was fine and he seemed ok in himself. We were sent home but told to call if I was worried or if Winston became unwell. I spent the next few days watching him like a hawk!

After a few anxious days the vet called and said that the blood test results indicated it was pancreatitis. However, the results didn’t match Winston’s clinical symptoms. Apparently Winston should have been in a lot of pain but he wasn’t. The vet thought my dog had IBS instead and suggested that we change his diet completely. He would also give him weekly vitamin B injections for 4 weeks. After this time we would review the situation

The information I’m going to give you next is advice I was given from my vet. Please do not take this blog as my advice about what you should do with a dog who has IBS. My advice is to take your dog to your vet and follow their guidance.

The vet recommended I immediately replace Winston’s food with Purina Pro Plan Hypoallergenic (HA) dry dog food. He said this would be easier for Winston to digest. The vet recommended Purina as it isn’t prescription dog food so I could buy it myself instead of ordering it through the vets and paying a lot more money for it.

He also said that Winston was not allowed any treats or supplements whatsoever! “Not even his evening carrot?” was my response. “No, nothing else.” said the vet. At this point Winston was a carrot addict. He knew when it was ‘carrot time’ and would lead me to the fridge. One day I’d run out of carrots and he spent the whole entire evening whining at me. I never forgot to buy carrots again. This was going to be hell!

The vet also said that I could give Winston Buscopan IBS Relief when he had an IBS episode. My vet recommended a very small dose (a lot smaller than the human dose) and added that Winston couldn’t be given another dose until 12 hours later. As I said before, do not take this as advice about what you should do for your dog with IBS – ALWAYS check with your vet!

I was feeling optimistic about Winston’s new food. It was cream coloured, looked like polystyrene and smelt like chemicals but Winston loves to eat other animal’s poop so I thought it was be easy. I was so wrong! It took me 2 weeks to get him to eat it out of his bowl properly.

For the first day or so Winston refused the food. He was obviously hungry but wouldn’t go near it. He constantly begged for his carrot and kept taking me to the fridge. It was heartbreaking to see him like this and I couldn’t explain why I was treating him this way.

I had to change tactics. I tried hand feeding him one pellet at a time in the hope that he would remember how hungry he was and start eating. We did this 4 or 5 times one day but he still wasn’t eating nearly enough. I cried and he looked sorry for himself.

I called vets as I was so worried that he wasn’t eating. They suggested putting a bit of water in with the food “to release the flavour” but Winston just looked at me like I was trying to poison him. I didn’t do this again. The vet was very reassuring and said that he would eat when he was hungry enough and to stick with it.

The next day I put a few pellets in my hand and this was going well until one of them stuck itself to his lip. The pellets go a bit tacky/sticky when damp and Winston did not like this at all!

By the fifth day I had managed to build Winston up to eating a handful of pellets from his bowl. The only clause was that I had to hold his bowl. If I put it down then he’d stop eating.

A couple of days later and he was eating approximately a quarter of his daily food in the bowl without me holding it. I’d wait a bit then add another quarter and kept this up until he didn’t want anymore. Within two weeks of his diagnosis, we had built up to where I could just put the whole scoop of food in his bowl and he’d scoff the lot unaided. Hallelujah!

In that two weeks Winston lost 5kgs. He was close to 40kgs anyway and could afford to lose a couple of kgs so I wasn’t worried. At the next vet check-up, he commented that Winston weight had dropped quite a lot then said “he was a bit of a tank though so I’m not concerned!”

You Have To Be Stronger Than The Puppy Dog Eyes

It was so hard to change our habits around food but I knew I had to be strict. I used to give Winston a little bit of my toast in the morning but I knew that would have to stop. I had to follow the vet’s advice for Winston’s sake even if I broke my heart to stop sharing bits of my food with him.

Shortly after he was diagnosed, we went to visit my mum. My mum spoils my dog as he is her only grandchild. She always gives him a little bit of what she’s eating and he knew it. During the visit, Winston was putting on his best puppy dogs eyes and mum asked if she could give him “just a little bit”. I told her no. Both of them looked unhappy. I pointed out that she would feel awful if she gave him some food and it triggered his IBS which would cause him to be in pain. This did the trick. And that’s what I had to remember every time he watched me eating.

Being out and about can be a bit of a challenge. You have to be on alert to check anything your dog with IBS sniffs as it might be a bit of food that would make him ill. Winston has always responded well to the “leave” command so he’s pretty good at not eating things off of the floor.

When we go to a pet shop, the assistants will usually offer him a treat so I have to be quick to tell them he can’t have anything. I’m used to the confused looks I get after saying the words “my dog has IBS so he can’t have anything.” The response is usually “What nothing at all? Poor fella!” He enjoys the fusses he gets instead though.

It’s been nearly 3 years since his diagnosis and Winston is still eating the same allergy food. He still doesn’t have any treats or his beloved carrots. The only changes I’ve made are to introduce coconut oil to coat tablets (worming, supplements etc) so that he’ll actually take them.

Winston used to have an IBS episode every 7-10 days. The first day is a gurgly tummy and he won’t eat, he’d only drink water. The second day was flatulence day – not as fun as it sounds. By day three he was back to his old self again.

In September 2019 I started Winston on a turmeric supplement. It took a few months for it to work its magic but I can happily say that he hasn’t had an IBS episode since the end of December! He still only has his allergy food and no treats/carrots as I don’t want to tempt fate. I know his diet sounds boring but it works for him and he loves his food. I’d rather a boring diet than risking triggering an episode and him being in pain.

If you have a dog with IBS and want to share stories or tips then just leave a comment below or contact me via on the other ways listed on my contact page. I’d love to hear from you!

If you liked this blog and want to hear more from me then sign up to my email list on my contact page (just scroll to the bottom of the page). I promise I won’t bombard you!